A. Collin Cherry, Esquire
Attorney and Counselor at Law 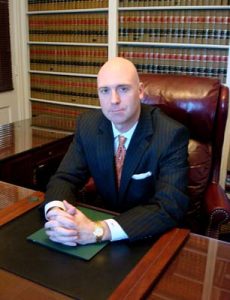 He received his undergraduate degree in Business Finance and minored in Economics from Florida State University.

EXPERIENCE: Collin served as a State Prosecutor in Felony, Misdemeanor, Traffic, and Juvenile divisions where he handled over 6,000 criminal cases. He was a State Attorney Liaison for the Weed and Seed drug program. Collin then served as a Senior Counsel for the Florida Department of Insurance (now Florida Department of Financial Services) regulating insurance companies for fraudulent practices. He opened his private practice in 2002. Collin’s private practice specializes in serious personal injury claims, wrongful death litigation, medical malpractice, civil rights and criminal defense of clients with accusations ranging from DUI, drug trafficking, and sexual assault to homicide. He carrys a heavy auto practice with DUI and civil personal injury cases. His firm has worked to obtain a $335,000 verdict on a $25,000 insurance policy and a $100,000 settlement in an auto accident case with a $10,000 auto insurance policy due to bad faith insurance practices.  Collin handled the defense of the one of the largest drug cases recorded in Leon County which was in excess of 9,000 pounds of cannabis. He obtained a 12 minute not guilty verdict on a Food Lion manager accused of 3 counts of sexual assault after a week long trial. Collin helped his injured clients obtain several million of dollars since starting his private practice in 2002. He had multiple DUI and drug cases dismissed for jurisdictional reasons, for police overzealous tactics including not allowing his client to use the bathroom in a timely manner, demanding performance of what are supposed to be voluntary field sobriety exercises, failing to video tape field sobriety exercises in violation of policy and making vehicle stops without legal cause. Collin had a client acquitted of two counts of vehicular homicide after an extensive publicized trial. Collin practices in both federal and state court. Collin is a passionate, highly skilled and aggressive lawyer who will fight for your rights in and out of court. Collin is the right attorney for you.